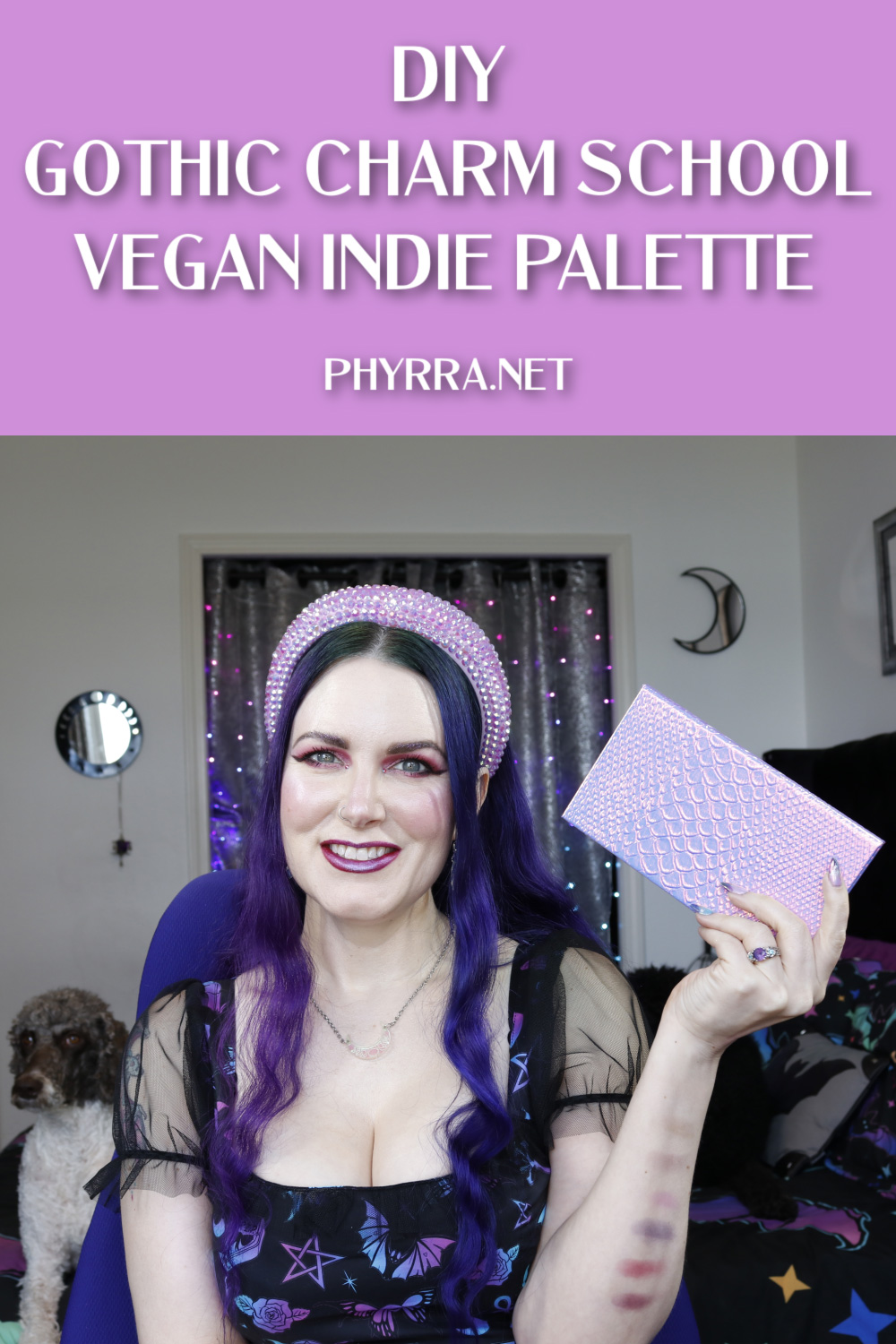 Hello, beautiful creatures! Today’s video is a shop my stash DIY Gothic Charm School palette. When my Goth auntie, Jillian from Gothic Charm School, was lamenting about not being able to find her perfect eyeshadow palette, I asked her what colors made up her dream palette. This video shows you each individual eyeshadow swatched on my lids, comparison swatches, other possible choices, as well as the final eyeshadows that made the cut!

Everything purchased by me because I love genuine indie makeup brands.

Who is Gothic Charm School?

Please watch the video on YouTube for Closed Captioning in English!

There are many fabulous swatches included in this video, I hope you enjoy them!

These swatches on my very fair neutral to cool yellow undertone (which turns olive when exposed to sun) were the starting point for the DIY palette. 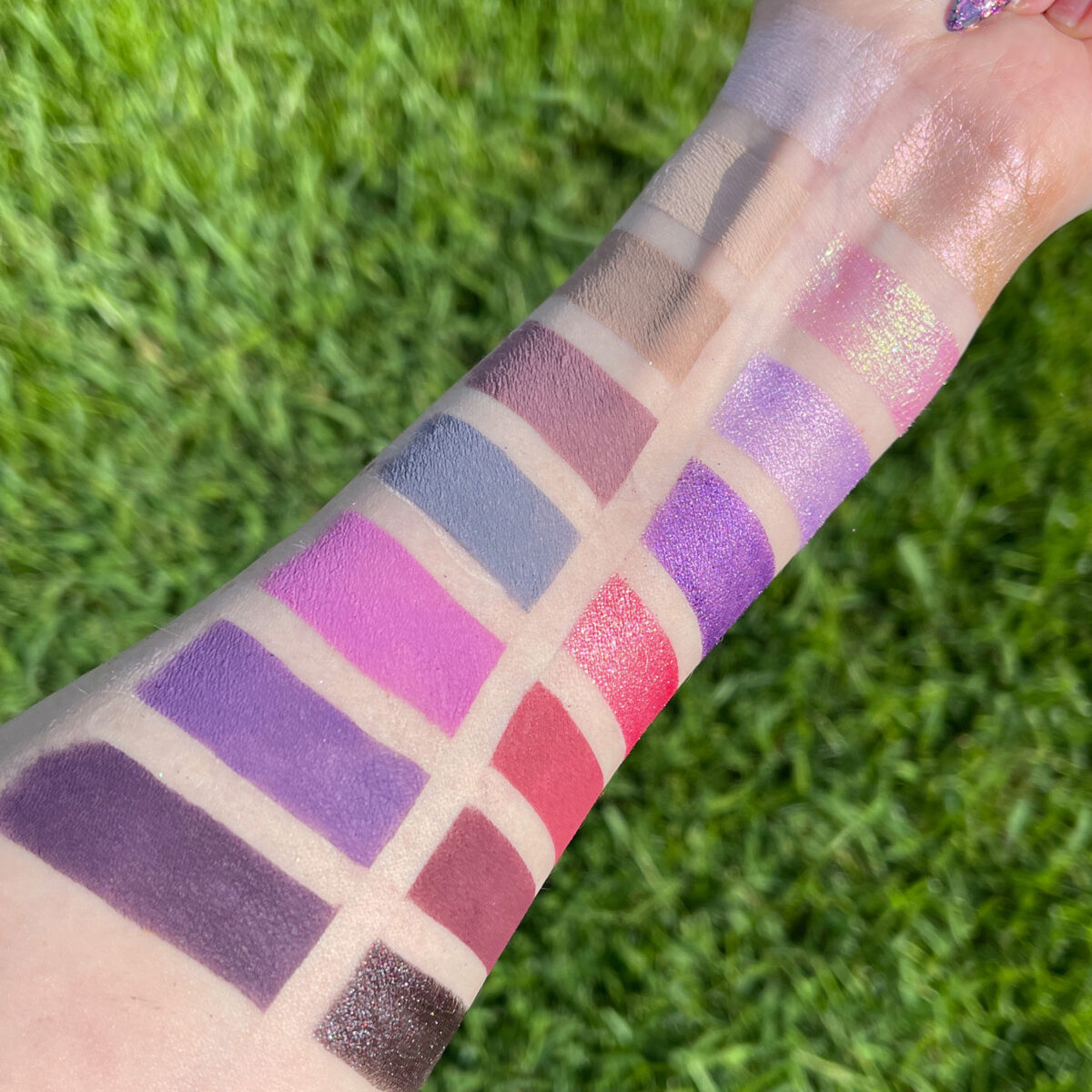 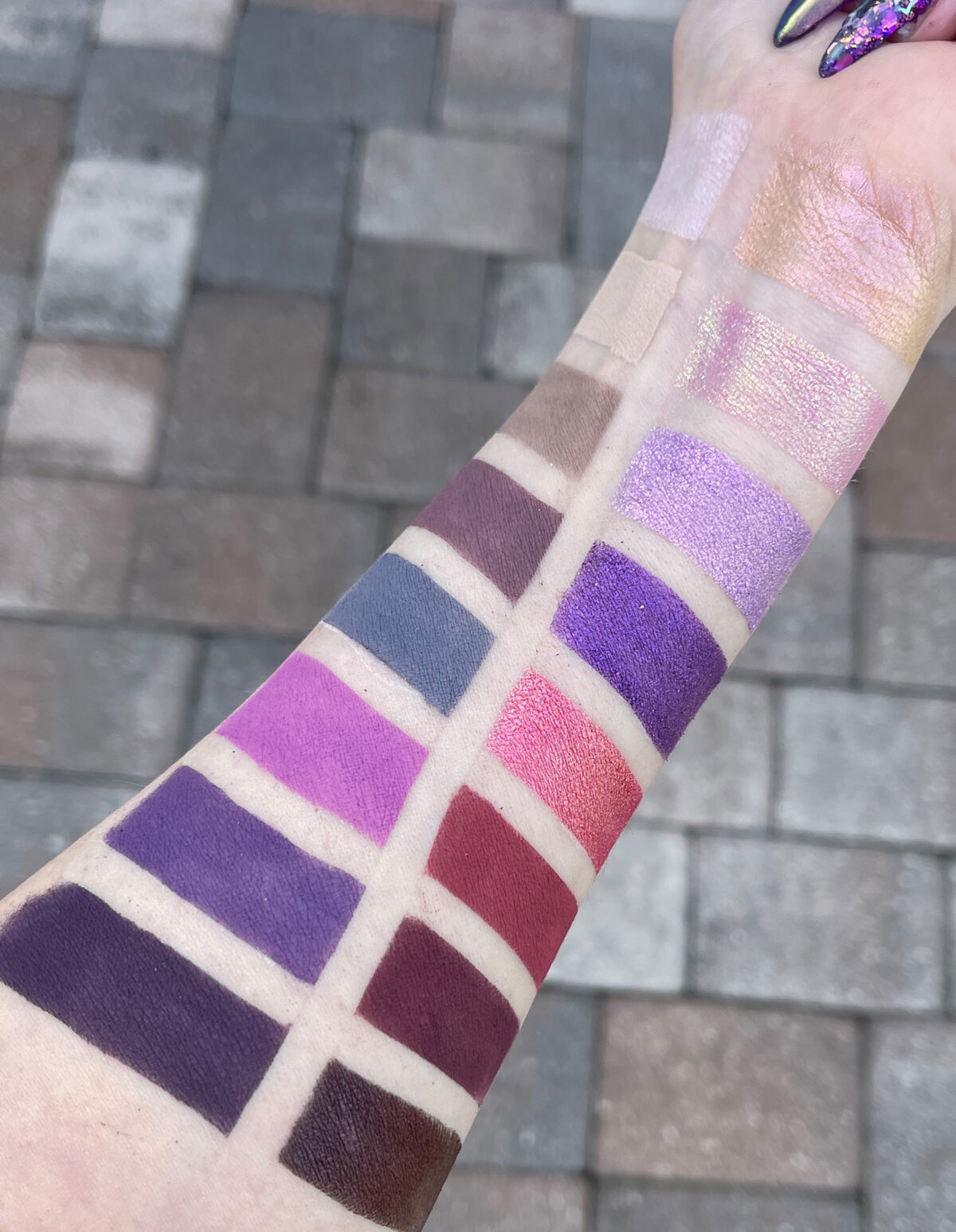 The search for an eyeshadow single the same hue as Wilted Roses was very challenging! 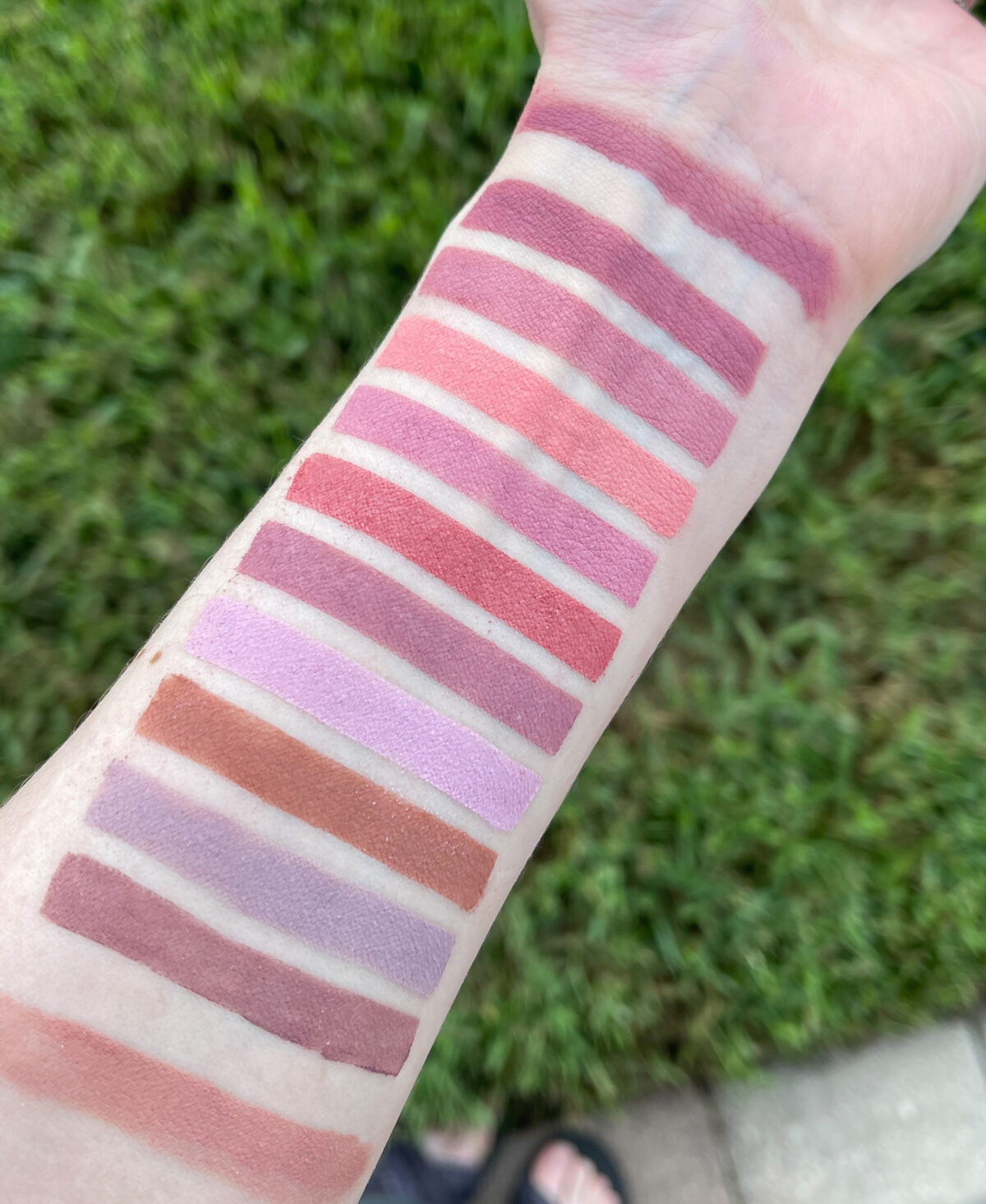 Swatches in order from top to bottom: 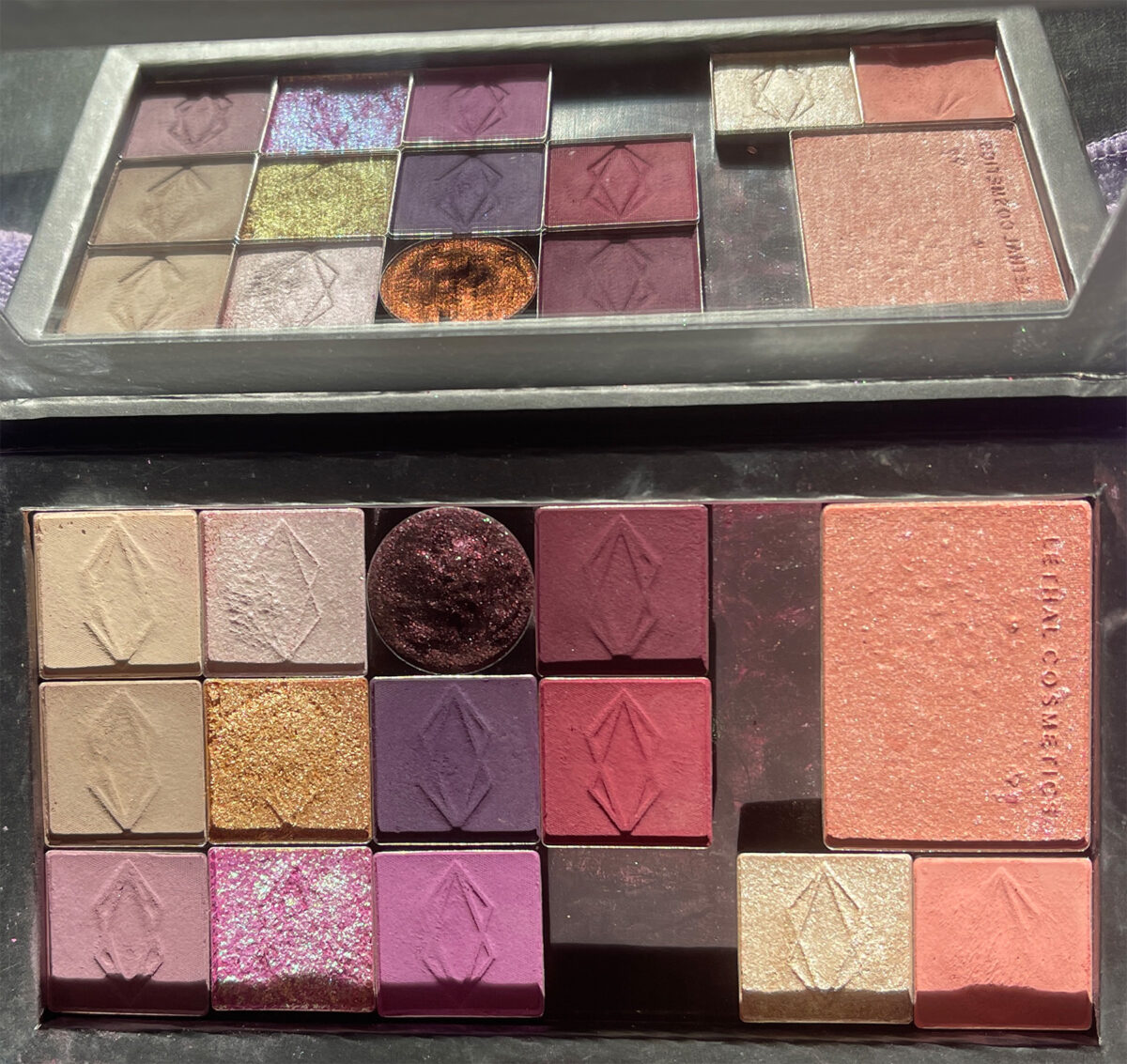 The eyeshadows are listed below from top to bottom. I used the reflection in the mirror to capture some of the iridescent multichrome shifts.

Also in my mermaid palette, but not part of Gothic Charm School: 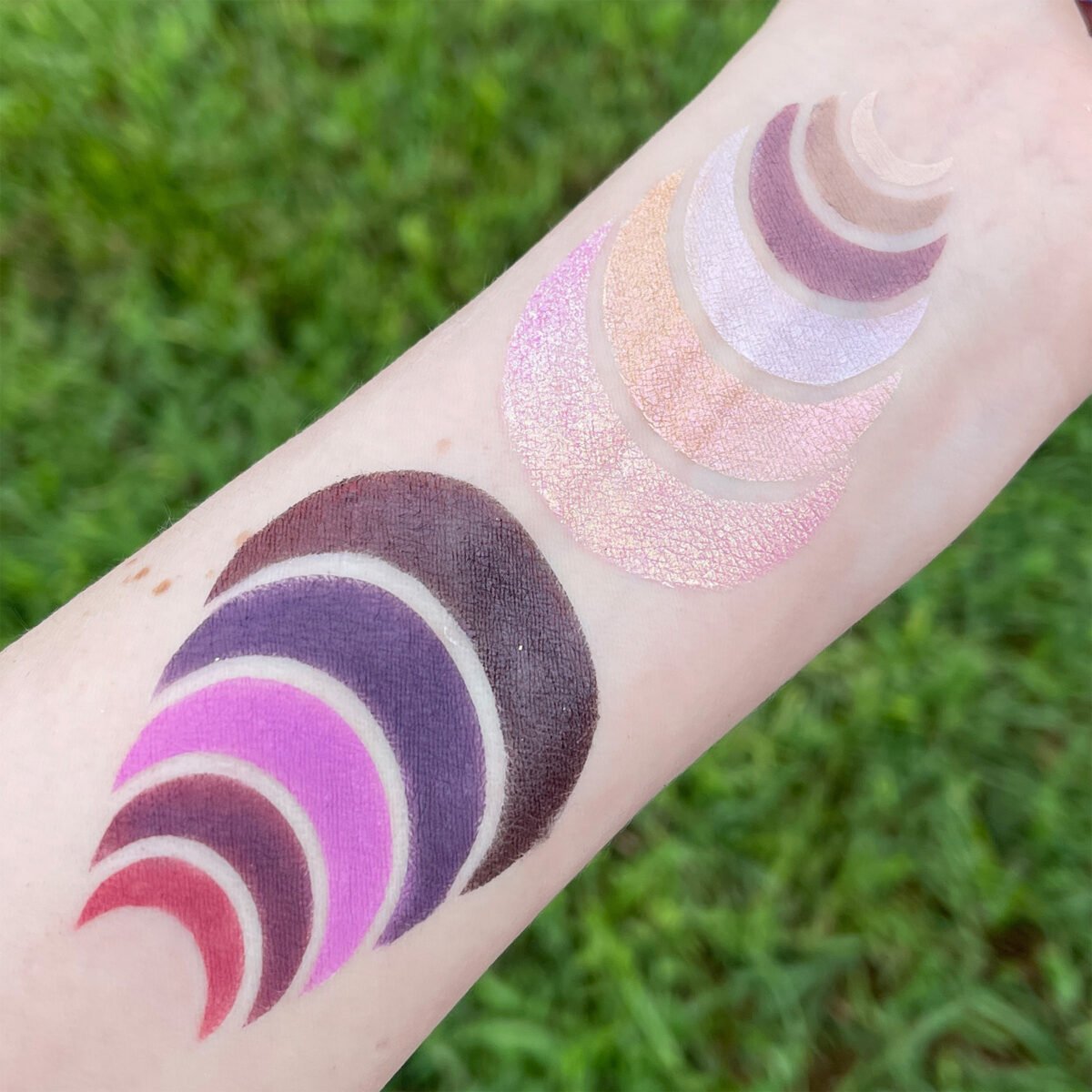 From top to bottom:

I don’t normally swatch each individual eyeshadow on my lid for a palette, but this one is special! My eyes were sore for a few days afterwards. It sucks to have sensitive skin but this was worth it for me! This entire process was a labor of love. You will see my eye swatches in motion in the video as well.

How did I DIY this palette?

Initially Jillian said, an ivory, cool-toned taupe, cool-toned blackened plum, cool-toned pomegranate, and a pink/red duochrome. I told her I could help her build her perfect DIY Gothic Charm School palette with indie eyeshadow singles and that I’d shop my stash to help her find it. We went back and forth with different sets of eyeshadow swatches, mainly Lethal Cosmetics and Terra Moons Cosmetics.

My first attempt to find her favorites included: Fahrenheit, Cascade, Frantic, Unity, Midnight, Nightcall, Echo, Arsenic, Calcination, and Unearthed. The second set helped us to hone in on more options and included some duochromes and multichromes because I couldn’t help myself – Arsenic, Allure, Moonbeam, Parsec, Unearthed, Twilight, Lithophyte, Nox, Circadian, Terrasphere, Dahlia, Cascade, Nightcall, Unity, Midnight, Blood Moon. Terrasphere and Blood Moon are by Terra Moons Cosmetics, everything else is by Lethal Cosmetics.

From that set, Jillian said she loved: Arsenic, Allure, Moonbeam, Unearthed, Lithophyte, Dahlia, Unity, Bloodmoon. Her maybes became: Parsec, Terrasphere, Midnight. We discussed Circadian, as it’s the color of my master bedroom and also a color Jillian loves, but it didn’t make the cut for her palette. Cascade and Parsec became enthusiastic Yeses!

The only color left at this point was a single dupe for the Necromancy Cosmetica Gothic Romance palette color, Wilted Roses. Jillian wanted a pale cool pink, so I scoured my eyeshadow collection for a similar shade.

From my eyeshadow palettes, the Natasha Denona Triochome palette shade Tungsten and Lime crime Venus III Dreamy are both similar. Jillian didn’t care for any of these, so we skipped it.

I do want to give Necromancy Cosmetica a shout out for their gorgeous Gothic Romance palette as it has a completely unique form factor as far as palettes in my collection go, and such gorgeous colors.

There were two possible Lethal Cosmetics pink mattes that I didn’t own that might possibly be the right hue for Jillian – Crossroads or Onset.

One other thing I realized while searching for the Wilted Roses single, The Natasha Denona Triochromes palette has several mattes that give me Melt She’s in Parties vibes – Tungsten, Naga, Garmon and Redox are kind of in that family to my eyes.

How to Use the Palette

What sort of shop my stash or diy palettes would you like to see in the future?

Here’s How You Can Shop The Ordinary’s Latest Launch Before Everyone Else: O.Lab

Here’s How You Can Shop The Ordinary’s Latest Launch Before Everyone...